As January goes, so goes……..nothing really.

We just concluded another down month of investment performance in January, 2016. When that happens, we spend the investment equivalent of Groundhog Day discussing something called the “January Effect” and whether that means stocks will be down for the year.

In rough terms, the January Effect is like one of Paul Krugman’s Zombie Ideas that just won’t go away.  It believes two things: (1) the performance of the market in January is some type of predictor of how the the market will perform for the remainder of the year; and (2) forced selling in December (for tax motivations) promotes heavier demand for stocks in January and thus higher returns.

Let us now turn to the evidence of markets past. The chart below was prepared by the good people at Dimensional Fund Advisors, and is used with permission: 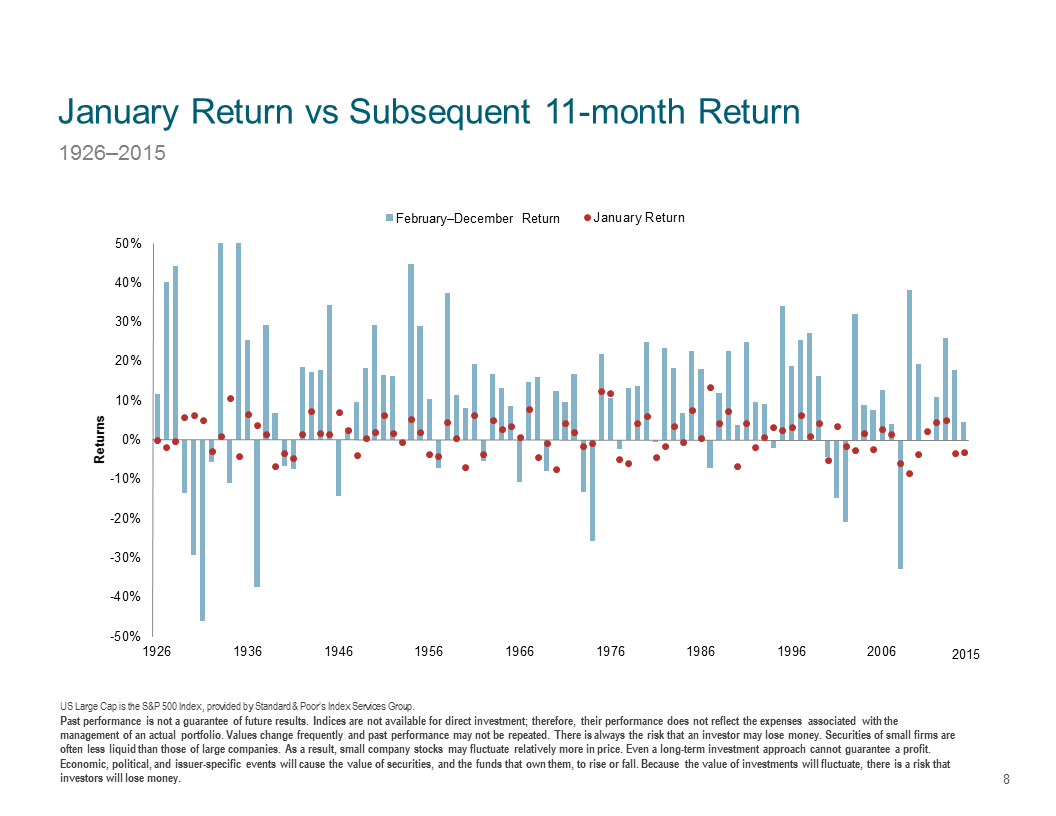 The red dots indicate the performance of the S&P 500 for the month of January.  The blue bar indicates the S&P’s performance for the remainder of the year (not including January).

Since 2006, the S&P’s performance in January only correlated with the performance for the rest of the year half the time (5 of 10 years). Going back to 1926, the January performance only matched the remainder of the year’s performance 57 of 90 years.  Yes, that’s more often than not, but I would not be placing much faith in an investment phenomenon that only works 63% of the time.

The other January question is whether stocks really do better in January than in other months? The wonderfully named site Money Chimp has a nice feature where you can compare market returns in certain months versus others.  Turns out, that going back to 1950 the market’s average return for January is 0.88%.  Sounds nice, until you compare it to the average return for December: 1.54%. So much for ‘forced selling’ driving down December stock returns.

Looking for patterns in market returns ends up being much like looking at clouds: stare long enough and hard enough and pretty soon you can convince yourself you’re seeing something.  That still does not mean there’s anything there to see.

People who shouldn’t hire me, part 2: “this time is different”

Which Way From Here?

People who shouldn’t hire me, part 1: the market beater

As January goes, so goes……..nothing really. We just concluded another...